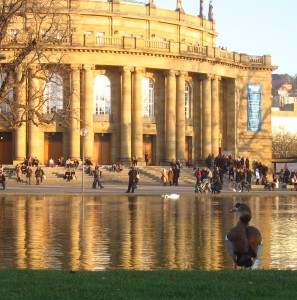 This years annual meeting of the German Crystallographic Society was held at Stuttgart University and it was an exciting experience to be there. A lot of people from highly diverse research fields, such as aperiodic materials, battery materials, bio-structures or order/disorder in glasses and liquids, have attended. Each day started out with a plenary lecture, followed by the parallel sessions. The lunch break was usually accompanied by a lunch session, meaning that some other topics or meetings were held while food was served. These lunch sessions were definitely a good idea! The afternoons were organized in the same way as the mornings, starting with a plenary lecture, followed by the parallel sessions. The late afternoons were reserved for either the Laue-Talk or the poster sessions.

There were also two social evenings. The first event was a visit to the opera house of Stuttgart to watch the opera Carmen, not to be confused with Carmina Burana. I have never been to an opera before so I took the opportunity to visit it. Luckily, I had an opera-experienced Protein-Crystallographer next to me who was able to explain to me the story of the opera (Thanks again!). The second evening was a social get-together dinner in one of Stuttgarts most famous Bräuhaus. Those Germans can cook, I tell you!

It was also a special conference for the Young Crystallographers. A lot has happened in our little community during the meeting. First, the lightning talks were held again. I still like the idea because within an hour and half, I could listen to a lot of different topics and learned in which areas crystallographers actually work. About thirteen enthusiastic people hold amazing talks which were continued in depth-converstions during the poster session afterwards. A small committee elected the three best poster presentations, which were awarded to Manuela Gorgel, Gregor Hofer and Sandrina Meis.
Second, we Young Crystallographers had our own lunch session during which an Arbeitskreis Treffen was held. We had a short out look for the next meeting in Berlin. It was followed by the good-bye of our former Co-chair Julia Dshemuchadse who was replaced by the enthusiastic Melanie Nentwich from Freiberg. It was a well attended session and I was happy to see that the group is active and growing!

After the four day long meeting, the crystallographic community left the University of Stuttgart with new acquaintance and knowledge and at least I was able to spend the first hours of Spring in a sunny Stuttgart.