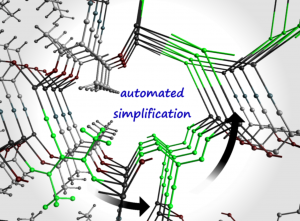 Periodic network-structures were of high interest over the last decades [1] but are often difficult to characterize. Programs and databases like TOPOS [2] and RCSR [3] support a precise description and comparison of complex frameworks. The presented software GTECS3D is a new, straight-forward program which draws on graphtheoretical algorithms for automated structure simplification and features high-end graphical visualization output. Some of its powerful functions are shown on new bimetallic coordination networks based on Al(acacCN)3 [4] and its transmetalation product [5].

Upon opening a cif-file with GTECS3D the structure is initialized, an adjacency matrix is calculated and some basic properties of the resulting graph are calculated and shown in the log-window:

The above output is for the structure obtained by partial degradation of Al(acacCN)3 [4] and directly shows some properties of the network: One adjacent component was found, expanding infinitely in 3 dimensions (given by the three vectors). Its determinant is 2, which indicates a 2-fold interpenetration of the network. Additionally a minimum number of unit cells needed for comprehension of the topology is suggested, followed by some graph-theoretical properties which are namely:

As the suggested number of visualized unit cells is 18 the first picture looks confusing. 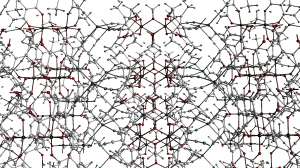 At this point the automated simplification algorithms are very useful. Removal of 1-connected nodes removes all dead ends of the net.

3. Simplification of the Network 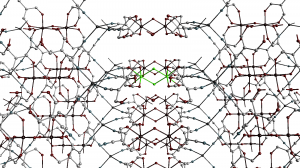 The result of the removal of 1-connected nodes is shown above. Highlighted in green is a 4-ring which is built by two Ag-centers bridged by two oxygen atoms. This ring can be contracted automatically to its center with another algorithm of GTECS3D. All 4-rings are found and their atoms are reduced to one node by retaining the connectivity to all other nodes. This results in the following network: 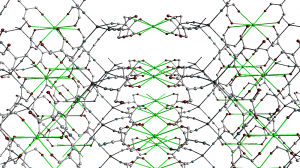 The next step is often the reduction of 2-connected nodes, which in principle reduces linear bridging ligands to edges, connecting the metal centers. An additional colorization of the network shows the interpenetration of the two nets. 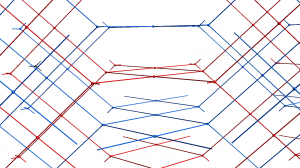 As the network is now reduced to its underlying net with only 2 different nodes a calculation of topological indices is possible.

For calculation of vertex- and point-symbol one has to distinguish between smallest rings and smallest cycles [6]. Whereas the latter can be used for the determination of the point-symbol and is calculated easily, the determination of rings can be time-consuming. Nevertheless, these functions are implemented in GTECS3D together with a calculation of the coordination sequence for all nodes. However, in the discussed network all smallest cycles are also smallest rings so that both algorithms yield the following, identical result:

Searching for these properties in the RCSR [3] shows that the network is known as ”pts-c” as shown in the picture below: A twofold interpenetrated PtS-network. 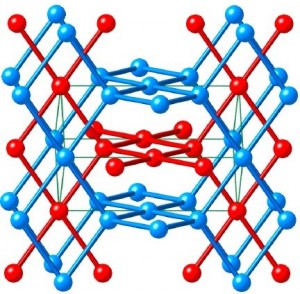 Using the new program GTECS3D, network structures obtained from reactions of the building block Al(acacCN)3 with Ag-salts could be simplified and investigated concerning their topology. One network is known as ”pts-c”, other occuring nets are the uninodal 3-dimensional network from the transmetalation reaction shown at the top (vertex-symbol 4.6.6.6.6.62), a cubic structure with ”srs”-topology (105.105.105) and 2-dimensional nets with 63 and 4.82 topology. All networks can be simplified easily with GTECS3D which can be downloaded for free from: