It is this time of year again. Christmas is approaching, everybody hurries from one department party to the next and most of us wait for the first traces of snow. For those in the community who can not wait for the snow, like me, I have dug into the topic of ice and snow.

The Handbook of Mineralogy has a very nice data sheet about the crystallographic properties of ice. To summarize it briefly, ice belongs to the space group P63/mmc with a = 4.498 A and  c = 7.338 A. I admire the scientific seriousness and accuracy of the authors while writing about the geographical distribution: „Worldwide; especially in polar icecaps and glaciers.“ :)

Several scientists in the past and present dedicated their lifes to research on snowflakes and how they are formed. The most prominent I have found so far is W.A. Bentley [1] who created a whole book filled with images of different snowflakes. The thumbnail image of this post is one from his book [1]. Bentley was also one of the first who started to deconstruct the old proverb „No two snowflakes are the same„. Several have followed and one of the more recent publications [2] about the classification of snowflakes is from Japan. They were able to distinguish „only“ 121 different kinds of snow and ice crystals. Armed with this paper and a magnifying glass, wintertime can come! 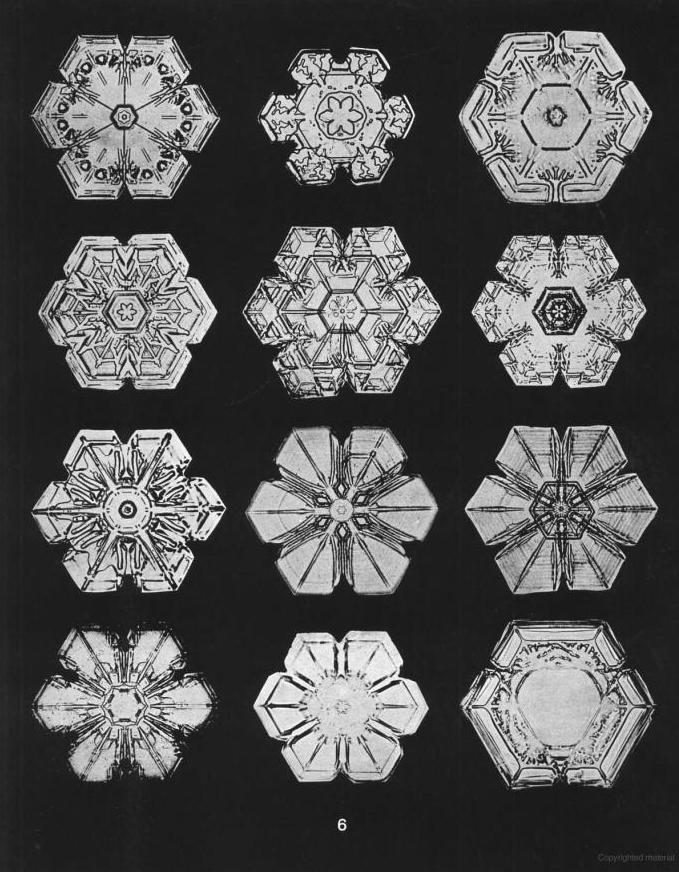 One panel of snowflakes captured by W. A. Bentley and published in his book [1] about snowflakes.