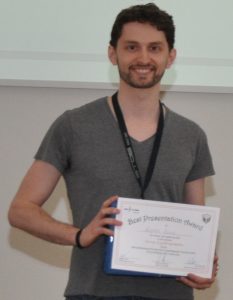 Matthias attended the DGK meeting in 2017 in Karlsruhe where he was awarded with one of the three presentation awards for his lightning talk and poster. Today, we are taking a closer look at him.
Matthias did his Bachelor and Master studies at ETH Zurich in biology and biological chemistry and worked on supercharged proteins for drug delivery systems. During his studies at ETH, he took up several research internships at different groups to extend his knowledge. In 2014, he got the Liebig PhD Fellowship stipend which took him to RWTH Aachen where he is currently working on combining proteins and inorganic particles.

Have a look at the publication related to his poster!

Your work bridges the gap between inorganic and protein crystallography, are you more interested in inorganic or the organic aspect of your work, if you are even able to tell these apart?
To me, the distinction between inorganic and organic aspects always felt a bit arbitrarily and constricting. Due to my biological background, I always put the protein in the first place, but for this project it felt completely natural to go just one step further and cross borders. This even led to some strange mix-ups, e.g. to me a protein loses a bit of its organic aspect when crystallized and feels more “inorganic” and artificial, similar to the inorganic nanocrystals I work with. I think it is only reasonable to see the different scientific fields not as strictly separated. The underlying science is more or less the same, only the applied techniques and the mindset of the people can be different. The latter is something which still astonishes me. While we see that most people are quite open to our interdisciplinary approach it can be frustrating when we are forced to overemphasize one aspect of our work just to fit into a certain category, e.g. for proposal writing.

You utilize a variety of methods, which one and why helped you the most
Well, the obvious answer would be protein crystallography. First, since the materials we realize are basically protein crystals, we would not get far without classical crystallization techniques like robotic screening, vapor diffusion or crystal fixation. And second, without structure determination at high resolution we would not be able to easily prove the binary nature of our crystals. Although, you can show this with a combination of nanoparticle synthesis, TEM and SAXS measurements as well, the time and effort is much higher and it leads to less meaningful results. But to be honest, the most important method is fast protein liquid chromatography (FPLC). While protein crystallography is only one part of my project, I use FPLC all the time. Obviously for purification of the vast amounts of protein we need, but also for separation of nanoparticle-loaded samples, post-treatment, co-elution analysis and much more. Lucky for me, I really like working with the device.

What was the biggest obstacle you had to face so far and how did you solve it?
Surely, one of the biggest disappointments was when I tried in vain to reproduce several nanoparticle syntheses described in the literature within our ferritin protein container. At the beginning of the project, we thought the synthesis part would be straightforward since there were already so many publications. But unfortunately, it turned out to be really difficult to transfer these results, which were often achieved with horse spleen ferritin, to our human heavy chain ferritin variants, although the proteins are so similar in function. Another problem was that the literature was often a bit euphemistic in terms of quality of their protein-nanoparticle composites. Sometimes the TEM pictures and size analysis were just bad or not all the experimental details were given. But the worst was that important “negative” results like bad stability or partial collapse of the protein shell around the nanoparticle were not mentioned. And since we have to crystallize the samples, we are dependent on perfect procedures, so crystallization becomes some kind of quality assessment. But after lots of trial and error we were lucky to find some synthesis protocols which work really well. However, at the moment we are not really happy and would like to have more different options. This is why we are going back to trying to encapsulate presynthesized nanoparticles within our protein containers. That way, we could really broaden the range of possible applications of our materials. It will surely keep me busy until the end of my PhD.

What was the most exciting moment of your research so far?
Actually, there were several moments I value equally (and led to me leaving the lab with a big smirk on my face that day). The first moment was when we got so many positive hits after the robotic screening, with at least some of them having a binary structure. Although the moment which excited me most was not until I observed the crystals under the electron microscope. While it is surely nice to have your x-ray data say “yes, you have a good crystal structure”, it is much more satisfying to see it with your own eyes, so to speak. This is also the moment when you can really admire the perfection of the crystals and finally grasp the size scale you are working with. And the best thing is knowing that you designed all this. The second moment was when we successfully produced crystals with nanoparticle-loaded samples. While scientifically spoken this was not groundbreaking, crystals with different colors just look more beautiful. So far, we can produce all kinds of colored crystals by using different nanoparticles as cargo or catalyzing different color reactions within the crystals. My dream would be a crystal rainbow, but I am still lacking two colors and did not find the time to produce one so far…Anyway, the last moment was just a few weeks ago, when we finally achieved magnetic crystals. Letting them swim around in the crystallization drop with a magnet was just fun.