Disclaimer: The following blog entry is deliberately stripped of almost all science-related stuff; we have another blog entry, which deals with all the science related topics. This is a story about how I deal with the situations that arise when traveling alone in a country and the accompanying language problems. This is also a story on the social part of the 23rd Conference on Applied Crystallography from my own personal and biased point of view. I would also like to note, that, although the stories seem to suggest otherwise, we worked hard during the conference, so if you (or my advisor, if he ever stumbles over this post) think, we were just there for vacation and fun, you should think again! I should probably also warn the reader, that they get a glimpse into my mind and heart, so you better brace yourself!

For the immersive reader, I recommend The Road to Mandalay from Robbie Williams and Learning to Fly from Tom Petty as background music.

The 23rd Conference on Applied Crystallography was about to start on Sunday in Krynica-Zdrój, Poland, and since I had never been to Poland before, I decided to stay there the weekend before and after. Although my first day in Krakow was eventful in many was, including a U.S. English teacher, a misplaced ebook reader and a Ukranian exchange student, I will start my story when I boarded the local bus to Krynica-Zdrój. The conference committee provided a shuttle bus for foreigners and locals, but it took quite an extensive and long detour, and I was keen to do some exploring on my own. I boarded the local coach from Krakow, not knowing that an adventure was waiting for me. I asked the non-English-speaking bus driver if I was in the right coach. After trying some variations, I settled with only stating the name of the conference place and he nodded vigorously.

I watched the landscape of Krakow pass by, spotting several impressive brick stone buildings, which mingled with some wasting-away grey concrete buildings. The bus rattled on over streets in a very bad shape and soon the landscape changed to a more rural one. We passed several forests and swamps and the flat land turned constantly into a more hill-like shape. Finally, we drove by a sign reading “Krynica” and when the coach came to a stop at a station I asked the driver again “Krynica?” and again, he nodded vigorously. I unloaded my backpack, trolley and poster-transport-box-thingy.

I found myself in the middle of a small village, cramped with hotels and holiday apartments and plenty of little stands selling jewelry and stuff like that. I started to rummage in my backpack for my carefully prepared directions and info sheet about the hotel. I could not find it. For a moment, anger at myself crept into my chest but it was almost immediately replaced by a curios and adventuring cheer. I looked around and saw next to me a map of the village, right in front of a ski-lift. Since I knew roughly the shape of the streets that lead to the conference hotel and since the village was pretty small, I soon located what looked like the street in which the hotel was supposed to be.

As I would later find out, the shape of the street was more or less correct, but that was all. The scale of the map in my head and in front of my eyes was quite a different one. I was lost before I even started to walk, though I didn’t knew it at that time.

Cheerfully, I started out, pulling my trolley over some cobble stone streets and marveling at the sweet little village until I reached a fork in the road. All the dawdling had driven all memories about the map out of my head. Why hadn’t I take a picture of it? There was no one around I could ask, so I turned around. Cheerful spirit unbroken, I trotted back while a small voice in my head said “Sometimes you have to take a look back, if you want to make progress”. On my way back, I saw an advertisement I couldn’t understand but on the bottom of it was the name of the conference hotel together with a phone number. As I learned from my experiences with the map, I took a picture of the number, sure that I wouldn’t need it once I was at the map. Back at the ski-lift, I took a photo of the map and stared at it for another five minutes or so, to make sure I wouldn’t forget it again. Slightly humming, I set out again on the now familiar path, pleased with myself that I now (wrongly) believed to know, which road I had to take. 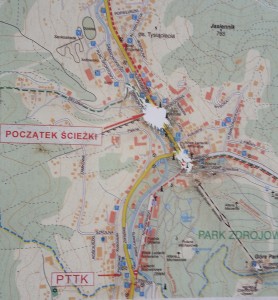