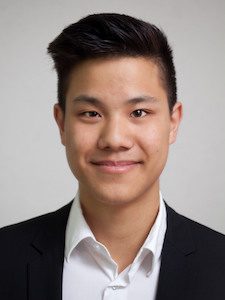 During this year’s annual meeting in Karlsruhe, the Young Crystallographers have elected Khai-Nghi Truong from the RWTH Aachen as a new co-chair. This was a perfect excuse for me to point a spotlight at him.

Khai started out with studying chemistry at the RWTH in Aachen in 2010 where he worked on the coordination of cadmium and mercury based halogenides. He continued his master studies in Aachen and the the University of York (U.K.) in 2013 working on catalytic palladium complexes and silver/ytterbium based coordination polymers. His excellent work awarded him a place on the Dean’s List. Next to his studies, he did several internships at RWTH Aachen, keeping himself close to academia.

What motivated you to become the next Co-Chair?
In 2013, when I have done my bachelor thesis with Prof. Ulli Englert and Carina Niewieszol (born Merkens) in the Department of Crystallography and Structural Chemistry at RWTH Aachen University, it was my first experience with scientific crystallography and it fascinated me immediately. During my master’s degree, I have tried many other research fields, but at the end I knew that I wanted to go back (it seems that Ulli and the whole Englert group already expected me to come back). It felt like coming home again.

During my bachelor thesis, I got to know many people such as Oliver Pecher [founding member of the Young Crystallographers -Ed.] because he was just sitting next door. It was great to meet him again during the Young Crystallographers Lab Meeting @ STOE in Darmstadt in 2015. I had the opportunity to learn more about the YC’s history, the community, the work behind it and that it is quite new. After meetings in Stuttgart 2016 and Berlin 2016, I was sure that I want to be part of the „Arbeitskreis“ and suggested in Berlin to host the 3rd Meeting of the Young Crystallographers in Aachen. After the team discussed and accepted the offer, Oliver asked me if I could imagine to be become co-chair during one of the social evenings (and a beer) in Berlin. I was firstly surprised, but also knew that I needed to take this one-chance opportunity. I will then have the best insight into the work of the YCs, can suggest my opinion and ideas, improve my skills in organisation and presentation, and be in contact with the community. I know that Melanie and I will be a great team.

Are there any works/activities you are especially excited about in your new function?
I am generally excited to be elected as co-chair. I have never done anything similar to this before and I am highly looking forward to all kinds of tasks. I want to learn from Melanie’s and the others experiences and see what has been done, what can be improved and what is missing. I like to thank the former and current co-chairs and team for their excellent work. They have built a great network between universities and companies over the last couple of years. The annual meeting in Karlsruhe was a big success this year with two lightning talk and poster sessions for us Young Crystallographers due to the fact that only one big microsymposium was scheduled parallel to ours. The result was that many people could listen to our talks and discuss it later during the poster sessions. I like to establish this also for the next years and make more advertisements on workshops or schools concerning crystallography. The organisation of meetings in my opinion is very important to get to know new people, meet old friends, learn about their work and get some new ideas for your own research projects. We are now focused mainly on crystallographers in Europe, especially Germany, but it is also important to connect to all crystallographers around the world. We should make in general more advertisement of how great crystallography is to the world, starting to teach it more in primary and high school.

What do you see as your most important task as co-chair?
The most important task is to motivate and show people how fascinating crystallography is (again), what you can do with all the different techniques and how powerful they are. I will try to represent the Young Crystallographers in Germany as good as I can and forward their ideas/opinions/suggestions to the board of the German Crystallographic Society. The networking of bachelor and master students, PhD students, postdocs, professors, companies, senior scientists and organizers of scientific events should also be in our focus using the social media platforms such as Facebook, Linkedin, or XING, respectively.

Is there something special that you want to achieve within the community?
I want to get to know each of you and your research topic, make a positive change by growing and making other scientists more aware of us and develop our community to an acknowledged one. Everyone should feel free to give their opinion and contribute anything they like to say to make the DGK-YC greater.