We did it! The Young Crystallographers of the DGK created a prize dedicated to the youngest scientists: the students. Starting next year, the DGK will hand out up to three prizes for the best thesis (bachelor, master, diploma or similar) in the field of crystallography from the previous year. 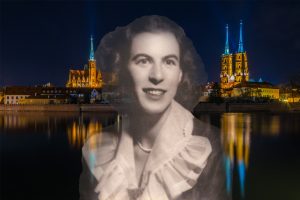 Lieselotte Templeton in front of her hometown Breslau. Foto edited by Constantin Buyer.

Applications possible by the students themselves or their supervisors

What do you get?

Good luck for your applications!

How did we choose the name?

The Young Crystallographers asked all DGK members to propose suitable names for this award and received many very nice ideas. During the virtual DGK conference 2021, a vote has decided on the name. Lieselotte Templeton is a wonderful namesake for the student prize of the DGK as the research of this German crystallographer strongly influenced the methods of protein crystallographers as well as physicists and chemists. Additionally, she impressed the young students by her warm personality.

For all of you who did not hear about Lieselotte Templeton before, we assembled a short curriculum mainly basing on Wikipedia [1] and obituary to her [2] and to her husband David Templeton [3]. Enjoy!

Life and Work of Lieselotte Templeton

Lieselotte Templeton (née Kamm) was born in 1918 in Breslau, Germany, as child of a modern, secular and Jewish family. Certainly, her well-educated relatives had a strong influence on her (father was lawyer, uncle Otto Stern was physicist and uncle Kurt Stern was botanist). In 1933, the family left Germany, foreseeing the upcoming events. During the next three years Lieselotte finished the high school in Versailles. Afterwards, the family emigrated to the USA.

Lieselotte studied in Berkeley and finished her B. Sc. 1946 and her Ph.D. in 1950. During her doctorate she worked on the plutonium project of the Manhattan District. This was also the time when she met her to-be-husband David Templeton while joining the same lectures. After the anti-nepotism rules were relaxed, both reached their most active working period.

Lilo programmed the analytical absorption program AGNOST/ABSOR, which helped her to solve the crystal structures of several compounds with heavy elements. Additionally, it was also particularly important while “studying anomalous dispersion at absorption edges with synchrotron radiation. Our measurements with compounds of cesium and several rare earth elements demonstrated the exceptionally large effects which occur at L absorption edges.” [2, a, b, c] These investigations lead to the development of a technique using anomalous scattering of multiple wavelengths, which is a standard method for protein structure analysis, today [3]. Additionally, Lieselotte and David used the polarized nature of synchrotron radiation to show X-ray dichroism in ansitropic molecules [d, e]. Thus, they were able to demonstrate polarized, anomalous scattering in experimentally [4]. For their joint work, the Templetons received the Patterson Award in 1987 for the use, measurement, and analysis of anomalous X-ray scattering [3].

Lieselotte Templeton died in 2009 in Berkeley, California (USA), one year before her husband.

What I saw in her at first, however, and continuously thereafter was that she did not allow her success as a scientist to get in the way of being a warm person. My appreciation of her worth as a crystallographer is that her contributions were not only what she did, in terms of research and publications, important though those are. As important, in the long run, will be what she was as a person, the epitome of a gracious scientific woman.

Although I didn’t see her as my type of role model back when I was a graduate student, over my lifetime I came to appreciate just how successful she was in carving out a scientific niche for herself and for being a very close, intellectual companion to David, while being the mother of two children.

Most important publications of Lieselotte Templeton

This entry was posted in Awards of DGK, Uncategorized and tagged Award, Young Crystallographers. Bookmark the permalink.
﻿