Posted on 2. November 2022 by Melanie Nentwich 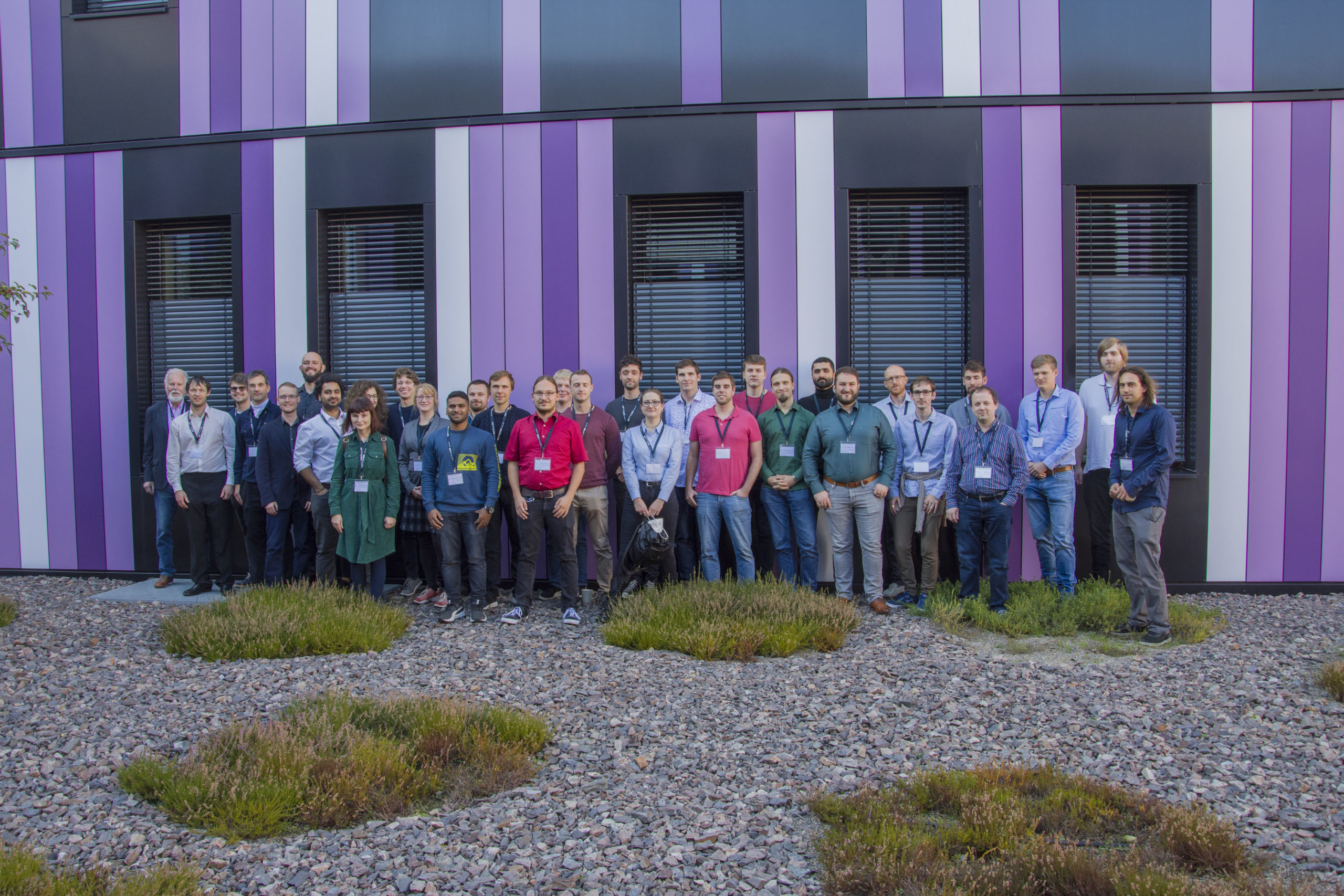 Group photo in the beautiful amethyst-coloured courtyard of the ZeHS (Photo: Constantin Buyer).

The second joint meeting of the Young Crystallographers (DGK YC) and Young Crystal Growers (jDGKK) kicked off on the evening of 3rd October. All participants were invited to a barbecue on the grounds in front of the TU Bergakademie Freiberg (TUBAF) refectory. This offer was gratefully accepted and together we got into the mood for the coming days with bratwurst, grilled cheese and a variety of local drinks.

Early in the morning of the 4th of October, the scientific program started in the brand new building of the Centre for Efficient High Temperature Conversion (ZeHS): At 8.00 am, the scientific spokesperson of the ZeHS Prof. Dirk Meyer, Constantin Buyer (DGK YC) and then Sebastian Gruner (jDGKK) greeted the audience.

A varied and exciting program followed, which clearly showed the variety within the field of crystallography. Professor Leonid Dubrovinsky (University of Bayreuth) started the lecture series with a fascinating overview of high-pressure crystallography, followed by an industrial lecture by Dr. Kay Dornich, who demonstrated the flexibility of Freiberg Instruments X-ray equipment by optimising routine examinations. After a short coffee break, the “Lightning Talks” began – an opportunity for all participants with poster contributions to give the audience a foretaste and brief insight into their own research. Especially without the pressure of having to present in front of dozens of “old hands”, this was a welcome opportunity to practice scientific presentation. The offer was very well received, as a total of 18 posters and lightning talks were presented!

Impressions of the Poster Session and the Lightning Talks (Photos: Constantin Buyer).

After a lunch break, where all participants were provided with delicious homemade spreads and bread, the series continued with a highly exciting lecture by Dr. Carsten Richter (IKZ) on tracking defect/dislocation formation in single crystals, followed by Dr. Manfred Jurisch, who reported on his challenges and successes in his life as a crystal grower

The first poster session started directly afterward, in which the first nine contributions were presented and discussed. Over coffee and small snacks, the posters were eagerly discussed and scientific details were exchanged. This was followed by a contribution from Dr. Laura Folkers, who used her example at STOE to explain the alternatives to an academic career and showed that science does not contradict industry.

The subsequent tour of the new ZeHS was an absolute highlight of the conference: Under the guidance of Dr. Barbara Abendroth  and Dr. Matthias Zschornak (both from Institute of Experimental Physics, TUBAF), the participants got a deep insight behind the scenes of the brand-new research building. The conference day was appropriately concluded after the approximately one-hour tour by a lecture by Dr Sebastian Bette (MPI Solid State Research) on the link between crystallography and art and culture.

Various laboratories at the ZeHS (Photos: Constantin Buyer). Left: A roll-to-roll system for the production of batteries by unrolling the starting material, processing (e.g. by Flash Lamp Annealing) and then rolling it up for further processing. Right: The small-angle X-ray scattering system “SAXsONIA” with wide-angle X-ray scattering option for structural characterisation of nanoparticles in dispersion or at interfaces (SAXSpoint 5.0 by Anton Paar).

The program of the first evening was probably the biggest highlight of the conference: a guided tour through the Terra Mineralia followed by a dinner in the museum’s exhibition rooms. Again in two groups – one English-speaking and one German-speaking – the participants were guided through the themed rooms “Europe” and “Africa” and were able to admire the massive stock of crystals from the collection of crystal collector Erika Pohl-Ströher. Some impressions are shown in figure 2. The subsequent dinner at the museum was as delicious as it was breathtaking: there was a sumptuous buffet in the midst of the enormous display of exhibits in a wide variety of colours. 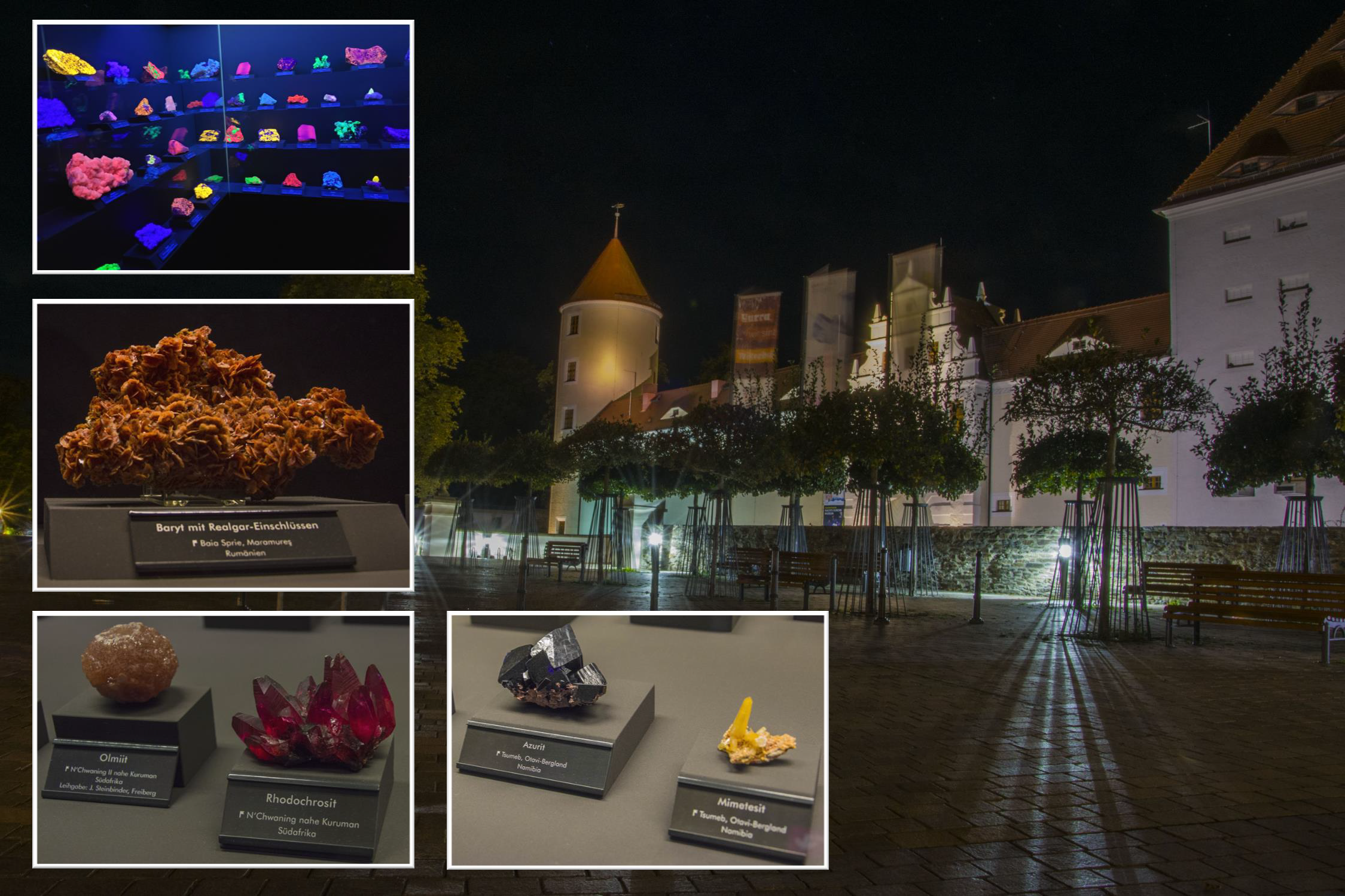 The last day of the conference started again with numerous contributions from the young crystallographers and young crystal growers. The remaining nine lightning talks were also promptly followed by the second poster session with plenty of coffee, snacks, and discussion.

Around 10.30 am, all participants were transferred to the Freiberg Compound Materials (FCM), where the rest of the meeting took place. There, Dr. Michael Rosch gave an exciting presentation on FCM’s challenges and solutions for the single crystal synthesis of germanium arsenide and silicon for use in semiconductor technology. This was followed by a deep insight into FCM’s manufacturing process and facilities in the form of a guided tour of the plant.

The conference was then concluded in a seminar room of the modern FCM building. Before that, however, three participants were honoured for their poster contributions with the STOE Poster Award: Maik Förste, Florian Meurer, and Max Stöber. Jakob Möbs, on behalf of all the organisers and helpers, thanked all those present for their numerous and active participation, wished everyone a good journey home, and thus ended the three days full of new experiences, insights, and exchanges at the second joint meeting of young crystallographers and crystal growers.

This entry was posted in Uncategorized and tagged meeting, Young Crystallographers. Bookmark the permalink.
﻿