Chocolate is not just chocolate. It comes in countless varieties from a multitude of manufacturers. The main ingredients, such as cocoa mass and cocoa butter, sugar, dairy products, spices and other fats, are all the same, except for differences in composition. However, it is about the crystals that make up the typical, but also variety-specific character!

During chocolate production, the so-called “conching”, stirrs the chocolate mass under the influence of temperature for several hours, similar to the process of crysta growth. This reduces the moisture, unlocks the flavours and, in particular, ensures that the cocoa butter crystallises in the desired crystalline modification [1–4]. This is how chocolate develops its shine, its characteristic crunch, its even melting and its pleasant cooling sensation and its popular and desirable aroma in the mouth.

Chocolate is very sensitive to variations in ingredients, manufacturing conditions and especially temperature fluctuations [3]. For example, the included cocoa butter is solid at about 5 °C and then begins to change structurally and morphologically as the temperature rises, finally becoming completely liquid above 36 °C. At room temperature, about a quarter of the cocoa butter in chocolate is already in a liquid state, with the other part being in a solid phase. This solid phase can in turn be amorphous or it can consist of several different modifications of cocoa butter, the so-called polymorphs. The cocoa butter can exist in a total of six different polymorphs, all of which have a different melting temperature. Polymorph V is the most suitable for chocolate, as it is stable at room temperature and ensures an optimal consistency, haptics and appearance of the chocolate, but then melts at body temperature in the mouth and the flavour unfolds. X-ray diffraction methods (Fig. 1) can be used to distinguish the individual polymorphs and thus quantify the quality of the chocolate [2–5].

Figure 1: X-ray diffraction can be used to investigate the crystalline components. For this purpose, a piece of dark chocolate was examined with the Bruker AXS Discover powder diffractometer (Cu-K alpha radiation) with Dectris Eiger2 detector (left). The resulting diffraction image (right, 2D detector frame, section of Debye-Scherrer rings along 2 theta) shows, in addition to the high-intensity reflections of the sucrose contained, the weaker reflections of the different polymorphs of the cocoa butter.

X-ray diffraction investigations can help to optimise the manufacturing process or, for example, to find solutions for preventing fat ripening for the food industry [1]. In particular, the crystalline phases of cocoa butter that occur during chocolate production can be elucidated and the crystallisation process scientifically investigated (Fig. 2). After all, what counts in the end is the appearance, haptics and taste experience of the chocolate, all of which are significantly influenced by the microstructure.

Figure 2: X-ray powder diffraction patterns of different chocolate varieties, recorded with a Bruker AXS Discover powder diffractometer (Cu-K alpha radiation) with Dectris Eiger2 detector. The positions of the reflections of polymorphs IV and V of the cocoa butter are marked. The crystallinity of the respective chocolate type is indicated in brackets. The reflections of sucrose are the same for all varieties (left), but on closer inspection (right) there is a difference in the proportion of polymorphs IV and V and their crystallinity.

Unfortunately, the proportions of polymorphs can change with the composition of the chocolate, e.g. the presence of crystallisation nuclei, the thermal history and the ambient temperature. This then also changes the appearance and physical properties of the chocolate. And so, white discolouration can also occur on the surface, one of the most important quality challenges in the food industry, the so-called fat bloom. This fat bloom is unsightly, but harmless. Its origin lies in the microstructure of the chocolate and the special properties of cocoa butter. The fat bloom is caused by the liquid parts of the cocoa butter, which migrate through pores in the nanometre range and cracks in the chocolate to the surface and crystallise there in the even more stable polymorph VI [2,3]. This leads to a partial dissolution of the crystalline cocoa butter inside the chocolate and thus to softening. This process can be suppressed by a suitable, time-intensive thermal treatment, lower porosity of the chocolate, storage temperatures around 18 °C or special additives that enable an increase in the crystallinity of the cocoa butter and thus counteract the liquefaction of the cocoa butter and softening of the chocolate. It is clear: the white coating can be interpreted not only as a sign of old chocolate, but also as a sign of a too rapid cooling during production (Fig. 3), a lack of thermal treatment or a too high a storage temperature. Chocolate is not spoiled by brief heating, but its properties are altered. 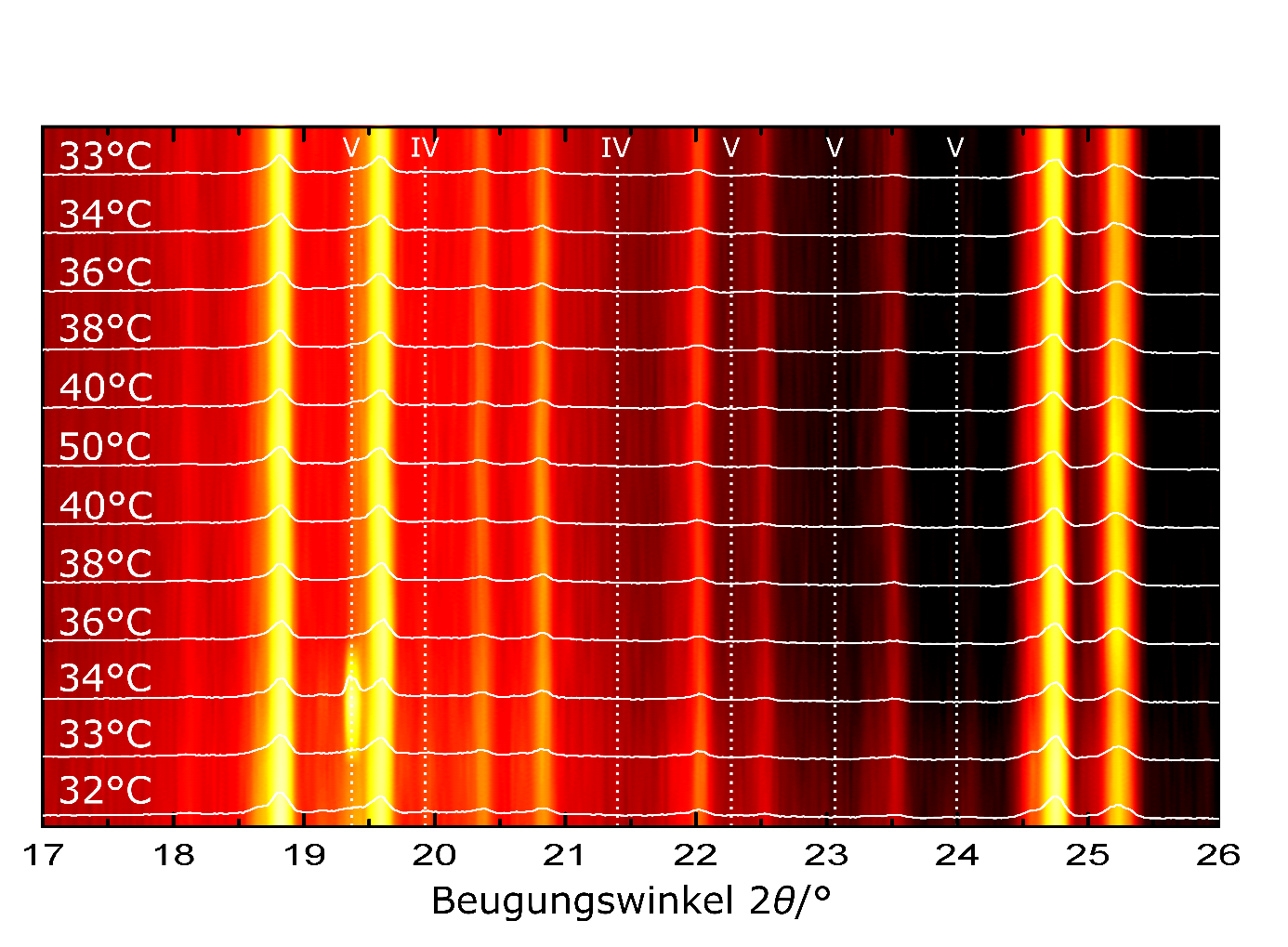 Figure 3: In-situ X-ray powder diffraction on a Bruker AXS Discover (Cu-K alpha radiation) with Anton Paar DHS1100 high temperature chamber during heating and cooling of dark chocolate. Heating and rapid cooling causes the polymorphs IV and V of the cocoa butters to no longer crystallise, leaving only the reflections of sucrose visible.

However, chocolate is not only known for its good taste, but also for improving cognitive performance. For example, Messerli [6] found a linear relationship between chocolate consumption in a country and the total number of Nobel Prize winners per inhabitant. According to this study, Switzerland is the leader in both the number of Nobel Prize winners and chocolate consumption. A coincidence?! It takes about 0.4 kg of chocolate per inhabitant per year to increase the number of Nobel Prize winners in a country by 1. The minimum effective dose of chocolate seems to be 2 kg per year and inhabitant. However, this is only a correlation; other influencing factors must certainly be considered.  But is there a better motivation for enjoying chocolate than to increase the quality of one’s own scientific work and perhaps even win a Nobel Prize one day? With this in mind, you will certainly no longer have a guilty conscience when the bar of chocolate on your desk suddenly disappears in its entirety!

This entry was posted in Uncategorized and tagged justforfun, Young Crystallographers. Bookmark the permalink.
﻿