Constantin Buyer is a Young Crystallographer since 2018 when he visited his first DGK conference in Essen. Since September 2020 he started to manage the social media accounts of the Young Crystallographer (LinkedIN, Xing, Twitter and facebook) as the successor of Wilhelm Maximilian Hützler. Therefore it is time to introduce him to you! 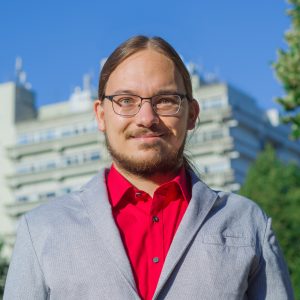 When did your interest in Chemistry start?

After visiting the Realschule I went to Kerschensteinerschule to get Abitur and a degree as a Chemical Technical Assistant there. After that, I started studying chemistry at the University of Stuttgart in 2013. The very interesting lectures in inorganic (solid state) chemistry led to my bachelor’s thesis in inorganic solid-state chemistry at the group of Prof. Dr. Thomas Schleid. Before I started my master’s thesis at Schleids group, I visited my first DGK conference in Essen 2018 with a poster about a crystal structure of my bachelor thesis. At this meeting, I got in contact with the Young Crystallographers for the first time. Afterwards, I visited the Young Crystallographers Meeting in Cologne and the DGK conferences in Leipzig and Breslau, where I was given the opportunity to write the related blog post.

Since Octobre 2018, I am a doctoral student in Stuttgart at the institute of inorganic chemistry in the group of Prof. Dr. Thomas Schleid. Among other things, my research deals with the synthesis of new fluoride containing compounds of the rare-earth-metals, which I investigate with single-crystal X-ray diffraction, powder X-ray diffraction and EDX analysis. Doped compounds, which show luminescence, are one of my goals. My experiments are either hydrothermal (up to 210 °C) or carried out in capsules of inert metals like niobium or tantalum (up to 1100 °C). My first paper was about dimorphic La2OF2Se in the MDPI journal Crystals. A second paper about an unexpected by-product by using tantalum capsules with the formula Ln3F2Se2TaO4 (Ln = La – Nd) is accepted. In addition to crystallography and solid-state chemistry, I am also is a talented photographer.

What fascinates you most about lanthanids?

In school, most teachers only told us about main-group elements and a little bit about transition elements, but they never mentioned the existence of lanthanids. Lanthanids are the elements “in the first row below the PSE”. The elements from lanthanum to lutetium and also scandium and yttrium are called rare-earth-metals. From lanthanum to lutetium, they get bigger in mass, but lower in atomic size (lanthanide contraction), resulting in  Yttrium having a similar to holmium although being separated by almost thirty elements. For rare-earth-metals, the most common oxidation state is +III (for some there is also + II and + IV common). With similar size and similar chemical properties, these elements often have the same crystal structure for their compounds, but different physical properties. Colourless compounds, which are doped by Eu2+/3+ or Tb3+/4+ show nice luminescence. Some holmium compounds show the alexandrite effect, where the colour of a compound changes between yellow and pink depending on the light source.

What is your favourite analytical method?

How did you come to the young crystallographer?

My first encounter was the DGK conference in Essen 2018 where Melanie talked with me about my poster. Later, at the conference dinner, I also talked with some other nice young crystallographers. In Leipzig, Cologne and Breslau I got to know more people from the group. As Wilhelm Maximilian Hützler wrote, that he is looking for a successor for social networks for the young crystallographers on facebook, I contacted the team. Because of my photography account on Facebook and Instagram I’m experienced in social networking.